skip to main | skip to sidebar

I caught this picture of Fiona and it just captures her perfectly. Just a smiley little happy girl!! Had to share it with you all...

Posted by hiscrappergirl at 7:45 PM 1 comments

Slides and the Ice Cream Truck

Well, we are all doing better around here. Fiona is finishing up with her cold, and it was a semi nice day that wasn't raining (its supposed to tomorrow) so Mike and I took her to the park this afternoon. We had a blast!! Fiona got to show off to Daddy all the cool stuff she could do now, and Daddy was quite impressed. Fiona is hilarious though, she just talks and talks and talks while she is playing, and even bosses the other kids on the playground around - even though none of us knows what she says!! She is picking up words like crazy - I swear she learned about 10 new ones this week alone. Her new favorite is "Stuh!" which means "Stuck!" I have to start taking some videos of her - her mannerisms and expressions are just way too funny!!

While we were at the park, the ice cream truck came by - yes we live in southern California, but mind you today's high was only in the mid 60's and it is February and the sight of the ice cream truck at this time of year still cracks me up. So of course, Mike is like, we should buy her an ice-cream. So we did, she took a couple licks and got brain freeze - you have got to see the pictures of her face!!!! It is hysterical!!!

Also she sticks out her tongue now when she does things, again, totally cute!!

Enjoy some park pics and wait for the Brain Freeze pics, you will totally crack up!!!

Posted by hiscrappergirl at 8:05 PM 2 comments

Happy Valentine's Day everyone!! We are just kicking it at home eating Heartshaped Peanut Butter Chocolate Chip Pancakes, and loving on each other :) Mike is usually deployed for Vday and we were kind of at a loss as to what to do this year, LOL!! So this seemed the perfect way, spending the day with the ones you love is what its all about right?? Hope you all have a wonderful day with your loved ones!!

Posted by hiscrappergirl at 10:09 AM 2 comments

A little under the weather

I know I have been slacking a bit on our blog. All of us have just been feelign a bit under the weather, not reallly sick but the feeling like its coming on. Fiona, though, did come down with a cold last night. so she has got the runny nose, and I am constantly running after her to wipe it.
Yesterday, Fiona and I baked some of our new yummy favorite cookies - Cranberry Oatmeal White Chocolate cookies. They are soo delish! I made two batches cuz it drives Mike bonkers for me to make cookies he can't eat - the first batch is supposed to be for our Valentine's Day party tomorrow (if we make now with Fiona being sick). What is better than a counter full of cooling cookies!!!! 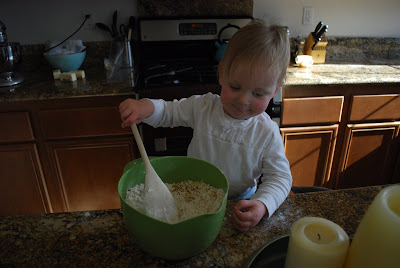 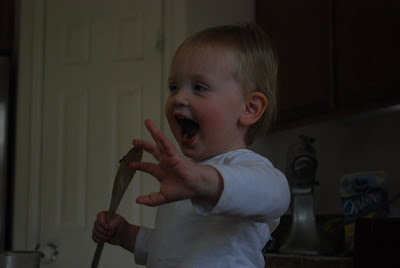 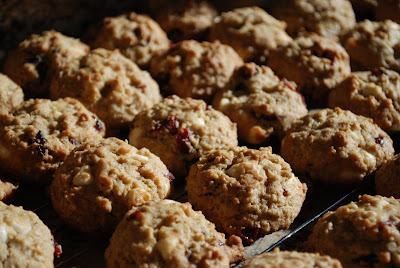 Fiona really enjoyed helping out, its really fun now that she is at that age where she can be involved more. I think her favorite part was eating the Craisins from the bag!! 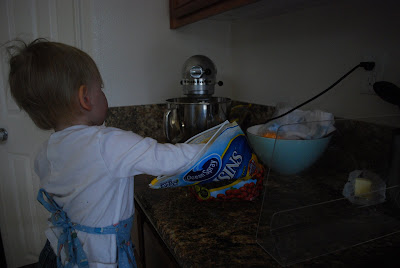 Well, that and eating the final product!! 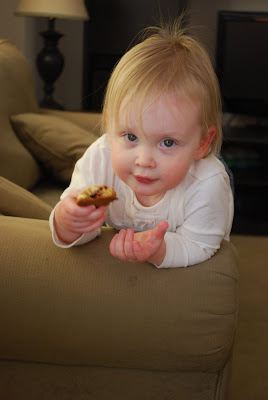 Posted by hiscrappergirl at 11:03 AM 0 comments

Blast from the past!!

ok, so I am attempting to truly embrace my inner organized and inspired scrapbookedness - which means my scraproom is pretty much all on the floor around me. but while going through a box of stuff I came across a funny photo of my going away party when I moved from Philadelphia to Boyertown. its in 87 or 88 and its hilarious!! even funnier, one of the girls actually became a Miss America contestant!! thought you may enjoy the laugh!! 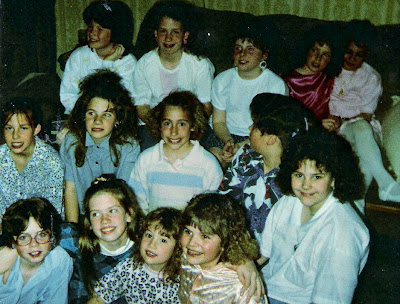 I look pretty much the same. I hate to say it, but thanks mom for not letting me get a perm or have bangs!!

Posted by hiscrappergirl at 7:56 PM 0 comments

Toddler bed a no go

Well we converted Fiona's crib to the Toddler bed. It was hilarious, as soon as she saw it, "Uh-oh, uh-oh, uh-oh broken (it did sound very much like broken...but maybe we imagined it)" but she thought her bed was broken. She slept that night ok, did not nap in the bed the next day and it got progressively WORSE!! Finally I asked her yesterday afternoon if the bed scared her, and she said yes. So the bed is now a crib again. She slept great last night and this afternoon. She only climbed out once and I told her if she does it again the toddler bed has to come back. Seems to have done the trick. So my baby is hanging on just a little longer to babyhood!!

Posted by hiscrappergirl at 6:08 PM 0 comments

hiscrappergirl
Hi everyone and welcome to the Hyland Happenings. I know we are usually pretty far from family and friends we needed a place to keep everyone up to date with all of us. This site allows us also to post some video clips, so it is perfect for everyone to see us in action as well. Please enjoy the site and check frequently for updates and new pics and videos - I seriously carry the camera everywhere I go, it just takes some time to get it from the camera to the computer, but it will get there. Love you all!!